When was the last time you took a look at your businesses phone bill? What was the base price that you signed up for? How much do you get charged in taxes? If you still use a legacy phone system and haven’t changed your phone carrier in the past year, you may be charged with hidden fees, taxes and surcharges.

Upgrading to a VoIP phone system could potentially save you some money while providing more value for the service purchased.

If you’re currently using one of the large national phone carriers (Vonage, Ring Central, ATT, Verizon, 8×8, or Spectrum), you should be aware of these hidden fees or surcharges.

These are usually way above the initial quote that their customers are currently paying. Below I will breakdown some invoices from these different carriers so you can get more insight into your monthly telecommunications bill. 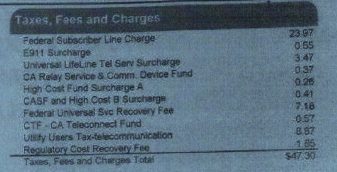 The Federal Universal Svc Recovery Fee is a surcharge that Spectrum uses under the guise of having to pay a surcharge to the FCC for your services. See their website for a breakdown of taxes and surcharges that could appear on your Spectrum bill. 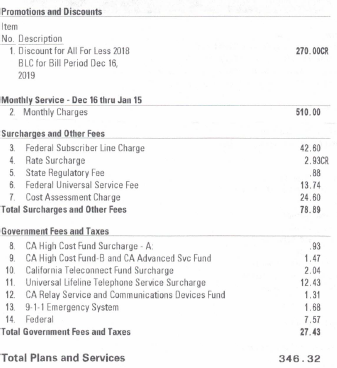 Per AT&T’s website, the Regulatory Cost Recovery Charge, Cost Assessment Charge, Federal Universal Service Fee and more are not government imposed taxes but rather ‘costs’ that they have that they pass to you as the customer.

Under surcharges and Other Fees there is a charge for State Regulatory Fee. My question to you is: If this is indeed a state tax why is it not listed under the government taxes and fees? AT&T says that your state may or may not charge this surcharge. The only example of a state that does is Hawaii.

The Regulatory, Compliance and Intellectual Property Fee is a fee Vonage passes off to their customers to cover some of their costs. As stated on their website, this fee is not a government mandated fee. It’s a Vonage specific fee and is typically just additional profit to their bottom line.

The Emergency 911 and Information Services Fee is also not a government-mandated fee. It covers the cost of providing you with 911 and 411 services.

Why are taxes different with VoIP phone systems?

State and government taxes are unavoidable. The percentage of tax on your phone bill will vary depending on what state you live in; however, your phone company should be realistic with you regarding the rough estimate that your taxes will cost.

For example, customers that use Bubble’s VoIP phone systems typically have a tax rate between 4 – 10 percent depending on the services that they require.

There is one surcharge, Federal Subscriber Line Charge, that telecom companies pay to the government at cost per line. With an analog phone system, you pay a percentage of the price per line.

Using a VoIP system, you can have a multitude of handsets, features, and capabilities that do not require you to have individual lines.

Thus, this surcharge is based on a lower amount of lines, since VoIP phone systems are based on the number of seats/handsets required by a company and not by the number of lines.

One of the reasons these fees and surcharges are so frustrating is that customers are unaware of them until after they’ve committed and are locked into a contract. Now, you are stuck in a term paying more than what you originally expected for your phone services.

It is disheartening that most large national providers have taken up this practice of disguising hidden fees in their bills and tricking customer to sign up under the guise of a low monthly base.

Here at Bubble Communications we do not add on mysterious or hidden charges to our customers’ bill. We try to be as transparent as possible in regards to the taxes and fees they will receive in addition to their base monthly.

Think about it this way – can you think of a tax, in the United States, that is between 30-50 percent? I definitely can’t think of any. So why is okay for your telecommunications company to charge you taxes in this range?

Stay on top of your service providers and make sure to hold them accountable to the rates and services that were offered to you at the point of sale.

View all posts by Dominique Lee →